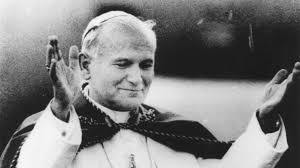 (CNA/EWTN News) The chief exorcist of Rome is seeing a rising number of young people coming under the influence of evil, but he has found in recent years that Blessed John Paul II is a powerful intercessor in the battle for souls.
A small, unassuming office in south-west Rome seems a rather ordinary setting in which to play out a grand battle between good and evil. It is here, though, that Father Gabriele Amorth has carried out most of his 70,000 exorcisms over the past 26 years.
“The world must know that Satan exists,” he told CNA recently. “The devil and demons are many and they have two powers, the ordinary and the extraordinary.”
The 86-year-old Italian priest of the Society of St. Paul and official exorcist for the Diocese of Rome explained the difference.
“The so-called ordinary power is that of tempting man to distance himself from God and take him to Hell. This action is exercised against all men and women of all places and religions.”
As for the extraordinary powers used by Satan, Fr. Amorth explained it as how the Devil acts when he focuses his attention more specifically on a person. He categorized the expression of that attention into four types: diabolical possession; diabolical vexation like in the case of Padre Pio, who was beaten by the Devil; obsessions which are able to lead a person to desperation and infestation, and when the Devil occupies a space, an animal or even an object.”
Fr. Amorth says such extraordinary occurrences are rare but on the rise. He’s particularly worried by the number of young people being affected by Satan through sects, séances and drugs. He never despairs though.
“With Jesus Christ and Mary, God has promised us that he will never allow temptations greater than our strengths.”
Hence he gives a very matter-of-fact guide that everybody can use in the fight against Satan.
“The temptations of the Devil are defeated first of all by avoiding occasions (of temptation), because the Devil always seeks out our weakest points. And, then, with prayer. We Christians have an advantage because we have the Word of Jesus, we have the sacraments, prayer to God.”
Not surprisingly, ‘Jesus Christ’ is the name Fr. Amorth most often calls upon to expel demons. But he also turns to saintly men and women for their heavenly assistance. Interestingly, he said that in recent years one man – Blessed Pope John Paul II – has proved to be a particularly powerful intercessor.
“I have asked the demon more than once, ‘Why are you so scared of John Paul II and I have had two different responses, both interesting. One, ‘because he disrupted my plans.’ And, I think that he is referring to the fall of communism in Russia and Eastern Europe. The collapse of communism.”
“Another response that he gave me, ‘because he pulled so many young people from my hands.’ There are so many young people who, thanks to John Paul II, were converted. Perhaps some were already Christian but not practicing, but then with John Paul II they came back to the practice. ‘He pulled so many young people out of my hands.’”
And the most powerful intercessor of all?
“Of course, the Madonna is even more effective. Ah, when you invoke Mary!”
“And, once I also asked Satan, ‘but why are you more scared when I invoke Our Lady than when I invoke Jesus Christ?’ He answered me, ‘Because I am more humiliated to be defeated by a human creature than being defeated by him.”
The intercession of the living is also important, though, says Fr. Amorth. He reminds people that exorcism is a prayer and, as such, Christians can pray to liberate a soul or place from the Devil. However, three things are needed.
“The Lord gave them (the Apostles) an answer that also for us exorcists is very important. He said that overcoming this type of demon, you need much faith, much prayer and much fasting. Faith, prayer and fasting.”
“Especially faith, you need so much faith. Many times also in the healings, Jesus does not say in the Gospel it is me who has healed you. He says, you are healed thanks to your faith. He wants faith in the people, a strong and absolute faith. Without faith you can do nothing.”