The “humble” Holy Grail that belonged to Padre Pio

In light of the recent articles about a purported Holy Grail in Spain, one of many throughout the world claimed to be the true one, the story about the humble “cup” possessed by St. Padre Pio seems especially relevant.  In 2003, an Italian magazine made the spectacular claim that Padre Pio possessed the Grail, and had willed it to a Capuchin priest named Padre Cristoforo, from a nearby friary.

As you can see from the pictures below, this is a truly humble grail, something that the Teacher of Humility might have actually used at the Last Supper.  According to the article, Padre Pio wrote a letter to Padre Cristoforo, which has been authenticated.  It reads in part: “To Padre Cristoforo da Vico del Gargano, I entrust the remaining humble secrets given to me by the Christian faithful…I leave you the small Greek vase belonging to the Apostle Peter, kept a secret by me because it was a gift from God to my father and a witness of the great light, guard it for the poor faithful”.

When this article was published, I translated parts of it and reported about it on my Padre Pio web site.  It states that one of the friars who was then involved in Padre Pio’s process for canonization believed that the phrase “to my father” in the letter, refers to Padre Pio’s spiritual father, St. Francis of Assisi.  Thus this small vase or cup was transmitted over the centuries from St. Peter, to St. Francis, and eventually to St. Padre Pio.  Significantly, Padre Pio also mentions that this cup was “a witness of the great light.”

It sounds incredible but could this little, humble cup actually be the chalice of the Grail?  Well, it might not be the main chalice, but according to the visions of Anne Catherine Emmerich, the large chalice contained within it a small cup.  Further, at the Last Supper, the Apostles consumed the Precious Blood from separate beakers, there were six of them. Emmerich’s writings state that the Precious Blood that remained was placed into the small cup, and that cup was returned to its place inside the large chalice.  These relics eventually were distributed among the Apostles according to Emmerich, as reported in the fourth volume of her Life of Christ and Biblical Revelations.

Padre Pio’s cup was recently on display in Rome along with other Padre Pio relics at a special exhibit.  The exhibit will be travelling to the USA.  It is coordinated by Alberto Festa, grandnephew of Dr. Giorgio Festa, Padre Pio’s physician and author of the classic book on his stigmata.  Festa’s researches have established that the cup dates from the time of Christ.  A book has also been written in conjunction with the exhibit, see link.

That original posting from 2003 is still there on my web site at this link, with an important update about this exhibit.  In view of the letter by Padre Pio with its reference to St. Peter and veiled reference to St. Francis, the authentication of the letter and of the age of the cup, and in light of Emmerich’s revelations, I conclude that there is an extremely high probability that the “humble cup” of Padre Pio was actually used on Holy Thursday, and did contain the Precious Blood consecrated by Jesus Himself. 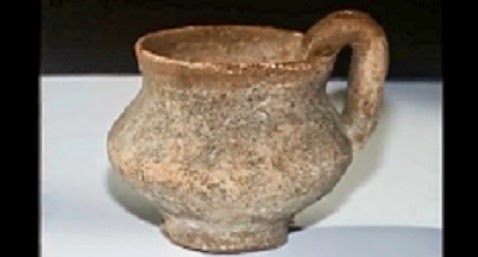 (from video found at this link)
http://divinefiat.blogspot.com/2014/04/the-humble-holy-grail-that-belonged-to.html