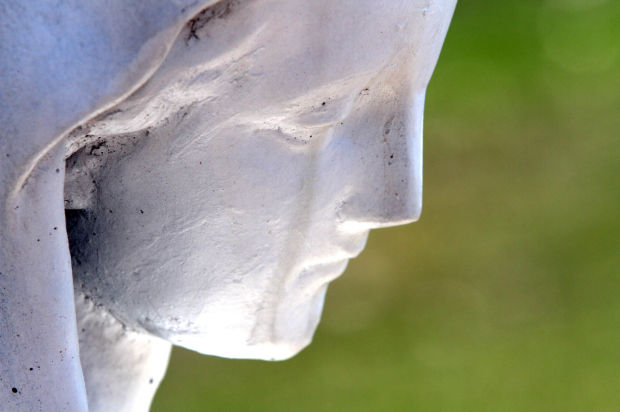 A student leaving confession Monday noticed what appeared to be a tear hanging from the chin of the 4-foot-tall concrete statue of Mary in front of the St. Mary Church administration building on Broad Street in Griffith. 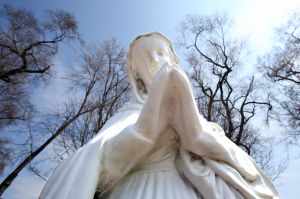 GRIFFITH | What appears to be a tear-stained cheek on a statue of Mary on the grounds of St. Mary Catholic Church is moving some people to tears as others caution against a rush to judgment.

Among the skeptics is the church pastor, the Rev. Theodore Mens.

“There must be a natural explanation — the cold, the melting of the snow,” he said. “Whenever we see something, we always look for a natural reason first.”

The white statue, about 4 feet tall, depicts Mary, the mother of Jesus Christ. Surrounded by tulips waiting to bloom, it stands in what parishioners call the “sunken garden” along Broad Street and is the site of the annual May crowning.

Mens said the statue has been there for at least as long as the 21 years he has been at St. Mary Church.

Majdolin Haddad, religious education secretary at St. Mary, said her daughter Reta, an aide in the fourth-grade Monday night class, told her about the tear.

Students in the class had left the church after confession, paused at the statue to pray and noticed a droplet of water clinging to the chin of Mary’s face, appearing to originate from the right eye.

A photo snapped Tuesday morning shows the droplet intact. It was gone by early afternoon.

Eyewitness who drove there.

“I just got back from Griffith, Indiana. I picked up a region GLP’er, proud_momma, to go with me, to be a witness. Yes, it is true. There is no doubt that moisture has come out of the right eye, and dribbled down the right cheek of the statue. Proud_momma had a phone and took pictures.She is going to a friends house later, to use their wireless so she can post a pic. I do not have wireless, and she has no internet.
We both checked the statue out real good, looking for various water marks, to see if by chance they came from the top or side of the head, instead of the eye. I don’t want to jump the gun, and say this is miraculous, but I stand by my findings of the right eye being the source of the moisture that dribbled down the cheek.There is no doubt about it.There are no other water track marks visible that could be the source.”