SEAHORSE KEY, Fla. (AP) — The din created by thousands of nesting birds is usually the first thing you notice about Seahorse Key, a 150-acre mangrove-covered dune off Florida’s Gulf Coast.

But in May, the key fell eerily quiet all at once.

“It’s a dead zone now,” said Vic Doig, a U.S. Fish and Wildlife Service biologist. “This is where the largest bird colony on the Gulf Coast of Florida used to be.”

For decades, Seahorse Key has been a protected way station for myriad bird species. It’s part of the Cedar Keys National Wildlife Refuge, which was established in 1929 as a sanctuary for birds devastated by decades of hunting for their colorful plumage. Accessible only by boat, today it’s a rare island off Florida not dominated by human activity and development.

When the birds come to nest, so too do biologists and naturalists who study the different colonies. But this year, the birds’ exit has the state’s avian biologists scrambling for answers. 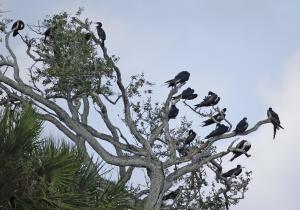 “It’s not uncommon for birds to abandon nests,” said Peter Frederick, a University of Florida wildlife biologist who has studied Florida’s birds for nearly 30 years. “But, in this case, what’s puzzling is that all of the species did it all at once.”

Doig said some of the Seahorse birds seem to have moved to a nearby island, but they’re just a fraction of the tens of thousands of birds that would normally be nesting on the key right now.

To find answers, service biologists have been acting on the few clues they have.

First, they tested left-behind bird carcasses for disease or contaminants. Those tests came back negative.

Next, they researched possible new predators. Did raccoons swim over from another island? Perhaps some great horned owls flew out at night and started feasting? 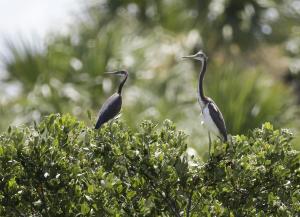 Traps caught a few raccoons, which is common, but not enough to have created a wholesale abandonment. There were no telltale signs of owls.

Finally, Doig said, recent years have seen an increase in night flights over the area by surveillance planes and helicopters used to combat drug runners. Although the planes’ noise could be disruptive, Doig admits it’s a longshot.

The abandonment concerns biologists because it could have a ripple effect: Many bird species here return year after year to the same nesting sites. The disruption provokes anxiety that this important island refuge could somehow be lost.

“Any rookery that’s persisted for decades as one of the largest colonies is incredibly important,” said Janell Brush, an avian researcher with the Florida Fish and Wildlife Conservation Commission. “It’s quite a large colony. There had to be some intense event that would drive all these birds away.”

Biologist also don’t know how the disappearance will affect the island’s other animals, some of which rely on the birds to survive. Cottonmouth snakes eat bird predators like rodents, and in turn the birds drop lots of fish and other nutrients from the trees to feed the snakes. 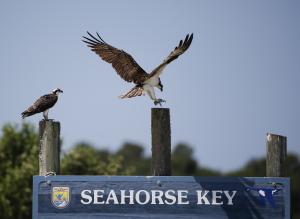 In the meantime, tour operators that once spent hours taking naturalists and bird watchers to the island are making other plans.

Mike O’Dell runs tours out of the little marina in nearby Cedar Key. He said on a Tuesday in May he led a group out to view thousands of birds crowding the shores of the key. On Wednesday, there was nothing.

“It’s just that drastic,” O’Dell said. “There were none. It’s like a different world.”